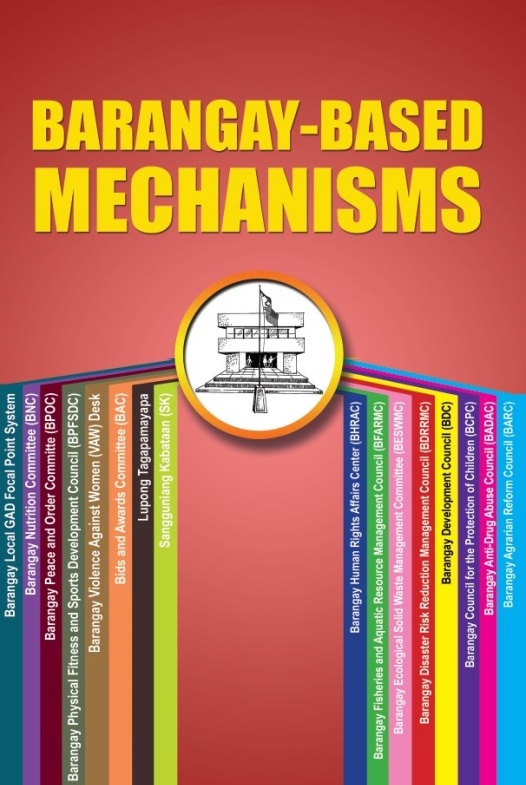 The Barangay, as the nearest government to the people, is readily available and within reach of mostly all Filipinos. It is considered as a forum wherein the collective views of the people may be expressed, crystallized and considered through consultations with the marginalized and the disadvantaged groups. Its barangay officials act as the first responders of governance in the delivery of basic services and the promotion of general welfare. As a basic political unit, it remains an arena for meaningful change. The barangay serves as the primary planning and implementing unit of government policies, plans, programs, projects and activities in the community. This is made possible through different committees, councils or boards, or simply, mechanisms that create a multisectoral relationship with the people.

The barangay-based mechanisms play a significant role in the over-all development of every barangay. In its desire to address so many concerns and to cause progress at the barangay level, the government initiated the creation of barangay-based development mechanisms. This has led to confusion, overlapping of functions, material and financial resources, uneconomical utilization of human and undue burden to barangay officials. As a result, these institutions became non-functional. To ensure that this altruistic government initiative is felt by the people, there is an apparent need to capacitate our barangays to be able to succeed in this aspect.

Through this Primer, we look forward to better governance by the public officials through the process of engaging with the citizens and members of the community and seeking to promote volunteerism, deliberation and partnerships. This helps to identify the established participatory mechanisms and structures, mostly chaired by the Punong Barangay, at the barangay level. In particular, strengthening the operational effectiveness of barangay-based institutions is an ideal. This, too, can also be a guide to civil society groups, people’s and non-governmental organizations, and other partners, in fulfilling the mandate of the Local Government Code and its IRR, for them to become active partners in the pursuit of local autonomy.